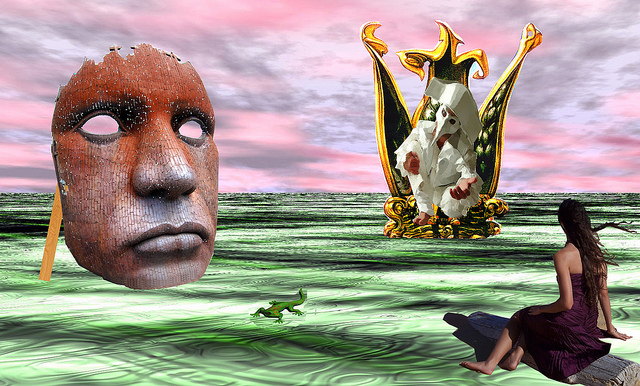 There is only so much in the way of denial’s witch craft that is capable of covering up the sad socio-economic state of a divided house …one which has been so poorly misguided that even abandon has now been replaced by a feckless spirit whose sparks’ promise it is to lie down in a bed of sorrow …as if, all you that (attempt to…) kindle a fire, (…all you …) that compass yourselves about with sparks: (…as in those who …) walk in the light of your fire, and in the sparks that ye have kindled. (In…) This shall you have of mine hand; you shall lie down in sorrow. Is 50:11

In like fashion, the Republican party is become so divided, and having just about lost its fight for its principals and or financial $upport …now stands to lose still more …more than ever.

As such, with no love lost (especially in that which was wasted on the abandonment of campaign finance reform) …it is now blind and grossly at risk …facing a fate of losing relevance, credibility and face to the spirit which spawned one word and one acronym which…by the way …is the same spirit which ushered in Columbine.

SNL knows the power of this truth lies in the appeal it embraced whole heartedly in repeatedly invoking apathetic indifference …that specifically whose power lies in eliciting the tragic attempt at what it saw as the humor of the concisions of; “…Whatever…!” and “…TMI…!

Beware of the concision.

Those who turn their backs on principal and embrace the casual convention of rejection …face the risk of losing face …losing it with the people …no matter which side of the isle one occupies …Wall Street and Main Street not withstanding.

If Obama taught us one thing it should have been that blame equates to no pain …but that also equates to no gain …a broad spectrum of opportunities lost which, eventually will bring about an ultimately greater pain …one well above and way beyond that which would have been shorter lived than in the sacrificed postponement.

Case in point; what has the embrace of avoidance netted beyond a Japanese-like lost economic decade?

A house divided, that’s what…!

A house divided will not stand …not in strength…and most certainly not in the plurality of the sickly can of wormy weaknesses which the Repuklicans’ primaries have opened up …the continuance of the Democratic play book …shame and blame not withstanding.

No thank you PACs …for your deliveries of choice have manifested anything but choice …true choice that is.

Oh sure …when one and most fall into the ditch of hate, therein is no short supply of opportunities to  take the low road, but who in their right mind would ever want to travel down there?

Oh! That’s right! That would be most all of the Republican field of Presidential hopefuls …and just about 35 t0 40 percent of the American Republican electorate.

Obviously, with so much manifest hatred as that which this cycle has exercised, Columbine may look tame by any measure of compare in the days to come.

Exclusion is not the incentive by which rewards the incentive of inclusion  …that is …unless it is to be said; there is no love lost when one loses in losing ones way.

Way Republicans. Word! Your’s is a tragic bed of sorrows in the making!

Isaiah 28:20 For the bed is shorter than that a man can stretch himself on it: and the covering narrower than that he can wrap himself in it.