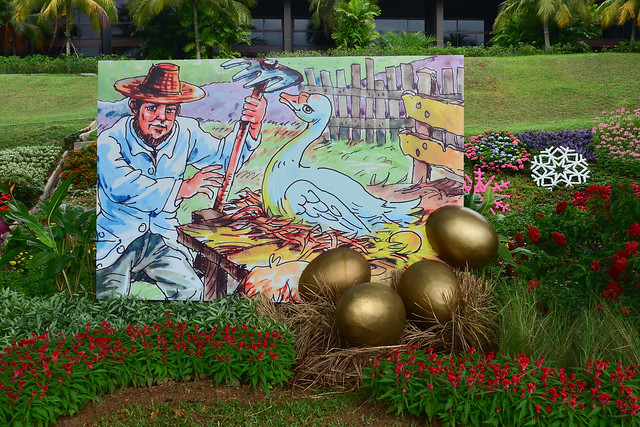 The Goose That Laid The Golden Egg

Who wouldn’t want to possess the goose that lays the golden eggs?

Well, having been made President and handed the right and responsibility to take the leading opportunity to be the potential hero of 2/3rd’s the bloody world’s leading economies; is seemingly suddenly, such as which has sadly translated into …nothing more but still greater deficits at a drag strip’s great rate race to the bottom of the course instead of what would make laissez-faire capitalistic organic economic growth possibly more plausible …all in a fashion which is, instead …shaping up to become what promises to be rather like the continuing need to put the pedal to the metal rather than the brakes on spending …particularly, when the media-directed shadows of today’s orchestrated narrative have rather relished pushing the prevailing themes of recession and the inverted yield curve’s verbiage …that is to say; more so than data …even when looking forward to no more than 1.9 % GDP Growth amidst dwindling forward-looking Corp. earnings …thanks largely to, notably …none other than …he who owns each of the golden tweets me thinks.

Prudence then, of a more fiscally responsible ilk …semingly is being ( justifiably overlooked ?) for WHATEVER REASON (?) left out of the narrative …that much, as is in regard for the subject of fiscal responsibility, is a subject which has too long been in short supply, unlike the tweets which are asailing the lump-sum Entourage of those among Jackson Hole’s Kansas City Fed’s Annual Economic Summit …howbeit, all with just about every intentional disregard for the leading independence of the Fed’s Monetary policy.

What is Making for …Pushing on A String

As I recall, there has conveniently long been a lesson overlooked in the pervasive opportunity given us in so far as the Pushing-On-a-String metaphor …one, which …I surmise …Will be a piece …as it already is …baked-into that of the next generation’s narrative …yet, which has sadly  been dropped from today’s thinly-worded narrow narrative …and is no where part of today’s concerns which are more narrowly focused … if not altogether consumed on the drag strip of today’s race.

Understandably, the President’s tweets have been countered by the media, which abound and continue in real time’s endless procession that have heralded blame for both tarrifs and uncertainty into the market … ascribing  blame  for market sentiment and volatility …the makings of which lead the market sentiment to an infant’s insanity’s instant state of volatility in a way, which …perhaps …will, or is an excuse deliberately designed to provide greater uncertainty that shall make for and deliver the ratioale with a backdrop to excuse and justify both continuing along the lines of quantitative easing … accommodated with the escallating need to adequately justify new rounds of stimulus …deficits …corporate welfare and money for nothing …as well as chickan feed for free for us consumers.

Sitting Down …Free to Resist …?

Just ask any Liberal Presidential Candidate. They’ll likely say; …at 23 trillion, we can afford it and a race to the moon …the Mars and back, but with respect to …homelessness …and immigration …not so much.

So then, as there is no difference on which side of the aisle spends and ratchets up still more ginormous deficits …and as Cheech might say; “…repression recession …? Ah …man, it’s all the same!”

But then again, who puts (the shorts …) in their options and who other than himself is in the Catbird seat …an enviable position from which to be able to form such a profitable uncertainty from which to trade on with Prior knowledge ..?

I, for one …can not say. But this one thing I know.

Sing Along, String Along, or Just Hung Out to Dry …?

We’ve been pushing on a string for way too long for this to end well …not even well enough …save for good when good isn’t good enough …not nearly enough at all for most …save those who have traded in the public trust in for a golden goose.

The right man on the left is a farmer. The man on the right is a liberal who resists and opposes what the farmer’s values in terms of private ownership and personal capital …such as sweat equity whose roots and branches are accrued from an ownership interest or an increased value in property earned from labor toward upkeep or restoration.

Whose standing up on their feet …and whose sitting down on their duff?